This year marks the 100 year anniversary since the start of the First World War. Blood Swept Lands and Seas of Red is the installation created by ceramic artist Paul Cummins, with setting by stage designer Tom Piper. Together he created 888,246 ceramic poppies which have filled the Tower’s famous moat, one for each of the British casualties in the First World War.

Seeing all those poppies was one of the most moving and beautiful tributes to war I’ve ever seen. It is an incredibly powerful homage to the fallen and I would highly recommend seeing them if you can. (They are being removed now to be sent off to their new homes, so be quick!)

There have been comments about romanticising war but I don’t think this does. Yes, the poppies are beautiful, exquisitely crafted and ornate but I believe the hours and toil in creating the installation is a fitting tribute to the soldiers who so valiantly gave their lives all those years ago. The staggering beauty of the thing has also drawn crowds in their millions upon millions. Making an installation as popular as this is some feat, but its success means that the horrors of war can be explained, taught and considered by everyone who sees it. And hopefully, will serve as a prominent reminder as we move forward in the future. 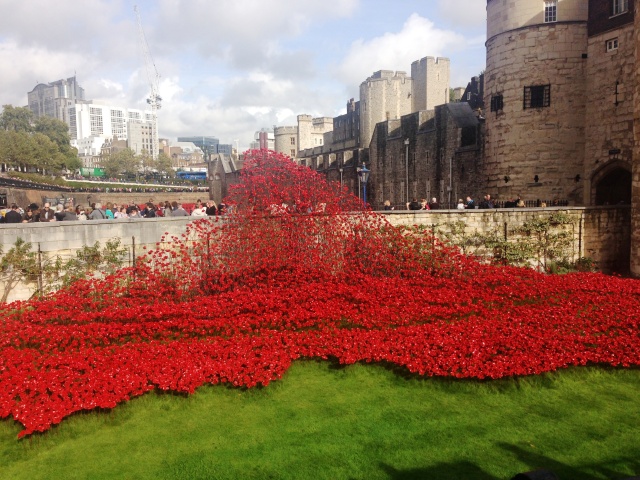 The Remembrance Day service can be watched on iPlayer here. Read more about the Royal British Legion here.

We will remember them