Little Women is a complete triumph

Based on the book by Louisa May Alcott (which I confess I haven’t read) Greta Gerwig adapted the story for the screen and managed to gather an enormously talented cast to bring the tale to life.

I knew basic bits about the plot (from Friends and pop culture generally) but nothing prepared me for the emotional ride I went through in those 150 minutes. I cried (a lot) and laughed (a lot) but most of all I felt a huge sense of affection and love for these characters which could have easily felt outdated (the book was published in 1868 after all). Instead the women go through predicaments and prejudices that me and my friends have gone through today (albeit we are allowed our own money now…!). But the same expectations of domesticity and homemaking are pressed upon us: nothing is more frustrating than being asked by my parents ‘have you found a boyfriend to look after you yet?’ as if I’m incapable of caring for myself. And yet I have the same struggles as Jo too – feeling lonely when I focus on work, wishing I could have simple dreams like Meg. It’s powerful stuff which I think will resonate with both women and men as we try to navigate our way into adulthood. (Proper adulthood, whatever that is, I’m 30 with a mortgage and still don’t feel like a grown up).

Saoirse Ronan is one of my favourite actors and I will see anything she’s in, gladly, and this showed her wonderful range. The passion and drive she forges in Jo is exceptional and inspiring, I was with her the entire way through the film. Even when I was sobbing at her rejection of Laurie. 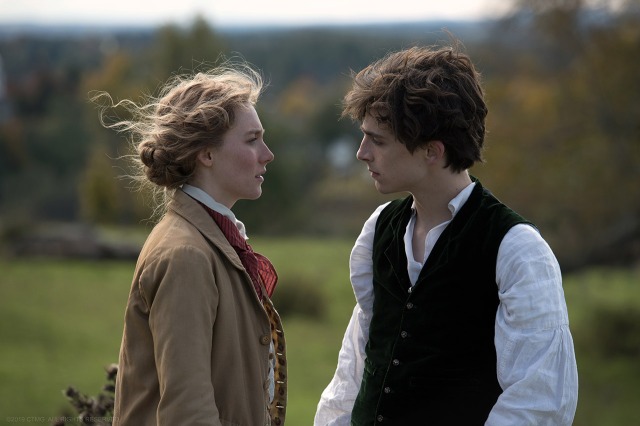 Saoirse Ronan as Jo and Timothée Chalamet as Laurie

And it’s not just the women – I was so moved and felt so much sympathy for Laurie when Jo rejected him. I have *been* Laurie. I am Laurie. Rejected, drunk, lost… that’s probably when I wept the most. I’m a big fan of Timothée Chalamet so there’s a slight bias but I thought he did a terrific job as Jo’s Teddy.

A fantastic supporting cast of Laura Dern, Meryl Street, and Chris Cooper add to the story but really the four sisters and Laurie could have carried this film alone. Florence Pugh as Amy, Eliza Scanlan as Beth, Emma Watson as Meg, and our star Saoirse as Jo looked so at ease with each other, there so much love between them that they are totally believable as sisters.

I have loved all of Greta Gerwig’s films and this is no exception. She has given the film a wonderful tone of warmth and humour which makes us fall for the charms of the girls so readily. A truly heart-warming film that is never cheesy or cutesy, and deserves all the awards that I believe are coming for it. It’s very nearly perfect. Though nothing ever really is perfect which is why Jo and Amy will forever be our favourites of the sisters.

Here’s the website for more info (all credit to them for the pictures above) littlewomen.movie and below is the trailer. Go see it!